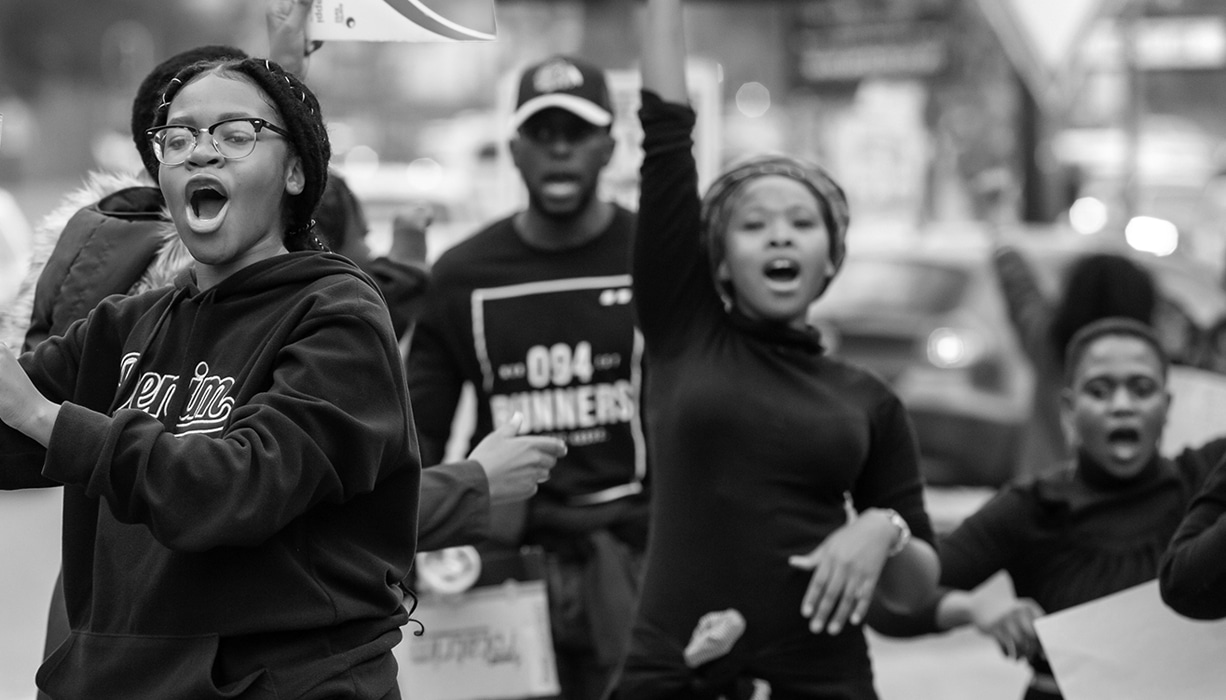 Sunday, 9 August marks 59 years since the 1956 march by 20,000 women to the Union Buildings, to challenge inequality and oppression on the basis of race and gender, marked by the extension of the apartheid government’s pass laws to Black women.  South Africa has declared 9 August as National Women’s Day, in recognition not only of the legacy represented by that march, and to acknowledge women’s contribution to the liberation of this country, but also to recognise that discrimination on the basis of gender, race and class continue to impede women’s full realisation of their freedom and Constitutional rights.  The intention of Women’s Day, and the events and celebrations that typically take place during “Women’s Month” of August, is to celebrate women’s achievements since 1994, but importantly, to raise awareness on the persistent inequalities, discrimination and abuse of rights experienced by women today, and show commitment towards achieving the aims and aspirations of those brave women of 1956.

Many have asked what is the value of a national Women’s Day, and what impact a series of events can possibly have on the lives of ordinary women.  Women’s Day and the events of Women’s Month bring a spotlight to women’s stories – providing much-deserved recognition of their accomplishments, as well as a platform to surface and demand response to the challenges they continue to face.  These issues are typically invisibilised in our homes, communities and conversations, and not ordinarily profiled in the media, which notoriously neglects women’s voices and experiences, tending to perpetuate harmful and discriminatory stereotypes about women.  The campaigns, workshops, media interventions and other events of Women’s Month are typically designed to renew focus and attention on these critical issues, and get us talking as a country – about gender-based violence, lesbians and intersex people, and what is needed through policy reform and changes in attitudes and practice, to ensure all women have equal access to rights, resources and opportunities, and recourse for injustice.

What impact do these events have on the lives of ordinary women?  Do they result in targeted interventions to improve women’s quality of life being prioritised in planning and budgets?  Do they lead to the much-needed changes in policy and behaviours?  Can they reduce violence against women?  Clearly, they cannot do this on their own, and need to form part of a series of strategic interventions to this end.  Women’s Day and Month, if strategically used, provide a platform to leverage awareness, accountability and action, buttressed by sustained advocacy campaigns and interventions.  The conversations which take place in our schools, workplaces, communities and places of worship can galvanise community activism and mobilise networks to take up the issue impacting on women now, 21 years into our democracy.

Why do we need these conversations?  Many would say that women have equal rights to men, and in fact are favoured and over-promoted, to the detriment of men and the boy-child.  We have in fact witnessed a hostile reaction and backlash against the women’s empowerment agenda, and an increase in conservatism in relation to women’s right to equality, particularly with certain cultural, religious and traditional communities.  The reality is though, that while women may appear to enjoy formal equality, that is recognition in law, and increased representation in political structures and in the workplace, in critical respects, women have yet to attain substantive equality in critical aspects of their lives, impacting on their access to and enjoyment of particularly socio-economic rights, their rights to dignity and non-discrimination, and in some instances, their very survival.

The State’s skewed implementation of its commitments to gender mainstreaming has resulted in women being rendered invisible in national and local development planning, from projects such as agrarian reform, the strengthening of the SMME sector and informal economy, to infrastructure and human resource development interventions.  Unless specific policy measures are enacted, for instance, to ensure women’s access to and ownership of land, and to enable women-headed SMME’s to access skills training, finances, tender opportunities and support measures available, we will not as a country ensure the eradication of women’s poverty, and will thereby not attain our country development targets and potential.  Women remain under-represented in the board room, in directorships and in top management positions in both the public and private sector, reflecting ingrained attitudes and perceptions towards women’s leadership, and persistent discriminatory practices in promotion, recruitment and appointments.  The institutional culture of the workplace, and non-recognition and accommodation of the domestic and child-care burden that our patriarchal society has placed on women ‘s shoulders, discourages and frustrates women’s attempts to advance.

We are well aware of the crisis of the shocking levels of gender-based violence in our country – these statistics and stories are, ironically, profiled more than ever during Women’s Month, and the campaign of 16 Days of activism against violence against women.  What many people may not be aware of, are the persistent failures within the criminal justice system, which thwart the effective investigation, prosecution and sentencing of these criminal acts.  Such failures result in the ongoing impunity of offenders, which of itself perpetuates gender-based violence.  Hidden too, are the traditional, cultural and religious belief systems and practices that cause harm, condone violence against girls and women, and prevent instances of abuse from even being reported.  This is evident where parents engineer the marriage of a daughter for their financial gain, or are complicit in forced and early child marriages, accepting paltry “damages” from suitors; goats for a 14 year-old’s virginity; R15,000 in lieu of her education and dreams for her future.

Women’s Day and Women’s Month interventions compel us to pause and take stock of our democracy and whether this lives up to the aspirations of women, as demanded by our sisters of 1956.  We have much to be proud of as a country, salute the gains attained for women, and recognise the achievements of women in politics, sport, the economy and the academe.  These women constitute positive and powerful role models that inspire young girls and defy outdated stereotypes of women’s capabilities.  It is up to us as South Africans to take up the space that August offers us to join in celebrations and conversations, not only of the events of nearly 60 years in our past, but in activism for the future women deserve, regardless of race or class.